Classifications of Fires and Extinguishers

Note: Do not attempt to extinguish a fire involving flammable gas unless there is reasonable assurance the source of fuel can be promptly shut off. In fact, if the only fuel burning is the leaking gas, the best method for extinguishing the fire is to shut off the fuel supply. Extinguishing a flammable gas fire, without shutting off the fuel, will allow unburned gas to escape into the atmosphere, which may permit a dangerous accumulation of gas to develop, and an explosion may occur if the gas is exposed to an ignition source.

Note: Extinguishers with a K rating are normally required where deep-fryers and/or griddles are utilized to prepare large quantities of food. An example would be a commercial kitchen similar to those found in restaurants and cafeterias. 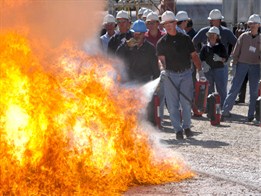